The house the children built

Sometimes following unusual signs can exceed all expectations. This particular detour also made me think good education is just good education - no matter what the latest label.
The sign said 'historic miniature bungalow' and is not far from Moana and Lake Brunner on the Greymouth side.
Driving down the straight road we all had a guess at what we might find. Someone's idea of a tourist attraction at a high price or a disappointing dollhouse bungalow perhaps?
What we found at the very end of street was Kotuku's old Jack's Mill School. In it's grounds was a 1/2 sized bungalow with 3/4 sized walls designed and built by eleven and twelve year old children back in the late 1930s. Unfortunately it is only open on Sundays  and it was Monday so we weren't able to walk through it and see the purpose built 1/2 sized bath, the running water, the built-in lounge seat and folding dining room table. 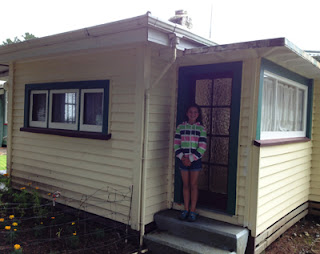 The sign explained it all. A Mr Edward Darracott didn't feel the children were being taught skills that would be useful once they left school so he came up with the plan to build the bungalow. He is quoted on a sign in the school grounds as saying, "Too long has the school been divorced from life as it is to be lived by the child afterwards."
He also said, "The child should be taught to think for himself, not take his lessons spoon-fed from the hands of the lecturer. More still, this training to think and to act should be in a situation as life like as possible."
Today one might use the terms '21st century learning' or 'experiential learning' or 'inquiry learning'. Mr Darracott was doing it in 1938 because it made sense. He had the community supporting the project and the bungalow building did not get any additional funding from the education board of the time. The children learnt not just bricklaying, carpentry, paint and plastering but also book keeping, surveying, letter and report writing - a rounded education. They even made their own carpet and organised insurance. Any school project that becomes a category one listed historic place is surely worth top marks.
It wasn't Mr Darracott's first change to the school either. When he arrived in 1935 he found the grounds and the surroundings gloomy, swampy and "despondent". He decided to get the children to improve their environment by creating a garden with concrete paths on the compass points.
His reason being, "Surely if beautiful thoughts and ideals are to be inculcated in the minds of these children, radical changes must be wrought in their surroundings as well as in their attitude of mind towards the finer issues of life."
The school shut in 1955 but the bungalow has since been restored. Some of the students who had originally designed and built it were involved in the restoration. It seems this learning lasted a life time.
Interestingly a few days later I was talking to secondary school student who was considering building a tiny house as part of his homeschool work. Being an advocate of the 'new' approach to education of emphasising experiential learning tailored to the needs of individual children, I am sure Mr Darracott would approve.
You can read more about the site on the DOC website.