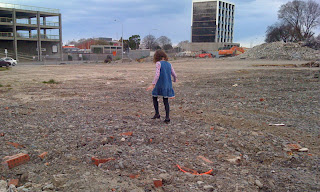 When most of the central city I have grown up in is now empty space, it is easy to spend too many hours depressed, angry and upset. It is even harder when future plans come out and it is difficult to know if they are good or whether money and certain sectors of society are having an undue influence.
I arrived at TEDxEQCHCH, almost two years after the quakes started, weary and wanting inspiration. I went to TEDxEQCHCH last year and came away inspired. There were many exciting plans and ideas, mostly from the overseas speakers. But I did leave with a big question as to what could I do and what influence did a mere resident had? 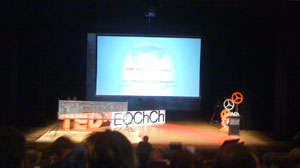 At the start of this year's TEDx I thought it wasn't going to be as good as last year's. But then the day gained momentum. Ryan Reynold's talk received a standing ovation and it was inspiring. I loved his idea of not worrying about the long term plans but there was opportunity right now to try things in this city. He pulled my fears of the future of this city back to look at the great activities going on now. We didn't have to wait for a good city to be rebuilt, we could be part of making that good city now. He showed, with a positive outlook on regulations, there was a world of opportunity in this city.
Jane Henley's talk was also inspirational about people getting together and collaborating to achieve local projects. It all seemed quite possible to make a difference.
Abbas Nazari received a standing ovation for his moving story of shifting to New Zealand as a refugee. He showed just what faith and hope could achieve.
I was intrigued by Jamie Fitzgerald's talk conclusion. It was different to what he had said earlier. The bit I liked the most was his comment during a difficult trans-Atlantic rowing race their manager said whatever conversations or process they were using to make decisions, it was the right one  and to keep doing it. He also made a good point that the times you move the least can be the most crucial and to not give up. I am a person who always wants to be moving forward achieving something and this was a thought I will store away.
Ernesto Sirolli had no slides and held the audience just with his talk. He showed just how important listening can be. He also pointed out we had given standing ovations to the locals. It was a reassuring thought that we had the good people here.
I purposely spent most of my day with people new to Christchurch since the quakes. It was refreshing to listen to a perspective that was not carrying around the sadness of everything lost or the underlying stress of living through all the aftershocks. They were looking at what is still here and what can be done.
My take home messages from the day were; planning and strategies are over rated, know what you are aiming at and do everything to get there and collaboration and co-operation are the way of the future. It should an interesting future, if we are prepared to get involved or support others doing the fun things.
As a first step we went on Sunday to help artist, Kiel Johnson build his cardboard city. 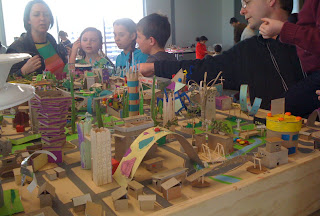 It was fun despite my limited artistic abilities with cardboard.
Unfortunately the week following TEDxEQCHCH, other consequences of the earthquakes hit us again.
That is Christchurch for you, one day on the up, next day heading back down.
The talks from this year's TEDxEQCHCH should be up here soon. Alexandros Washburn and Ian Taylors are also worth a watch.
Posted by Fiona S at 7:31 PM No comments: