The most satisfying thing to grow in the garden this year was watermelons.
I chose the moon and stars watermelon because it said it had excellent taste and across the internet people seemed to have success with this variety.
I grew the seeds indoors and didn't plant them out until late November.
It was exciting to see little watermelons start to grow but would they taste like proper watermelons?
I watered them regularly and the summer was a hot one.

Once they started getting big I carefully place plastic lids under them to keep them off the wet ground.
It was a long wait, watching the melons get bigger.
The test for ripeness is tapping and they should sound hollow. There are some handy YouTube videos on watermelon tapping. This was the best one I found as it is short and easy to hear the difference in sound.
The other sign I used was the browning of the curly piece of stem by the ripe watermelon. Once it was brown and dead looking, the watermelon is supposed to be ripe.
The watermelons ripened in early March. We got one watermelon a plant, which in kilograms was quite a bit of watermelon, especially when one kid doesn't really like it. 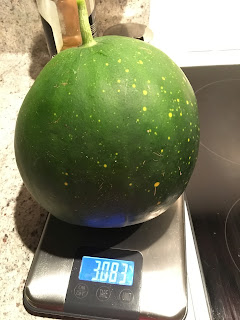 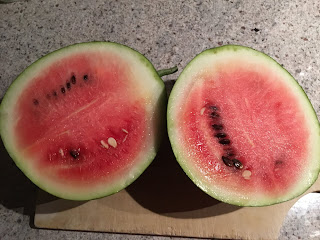 They are quite seedy these watermelon but they are sweet and juicy and delicious.
Once you have cut a watermelon, it does seem best to eat either immediately or within a few days for it still to be crisp. Taking a plate of watermelon places worked well, especially when we could say we grew it ourselves.
You can also make a pickle out of the rind that is a cross between a pickle and candied peel.
We have saved seeds and this year will plant half saved seeds and half new seed to see if we can get watermelons from the saved seed. 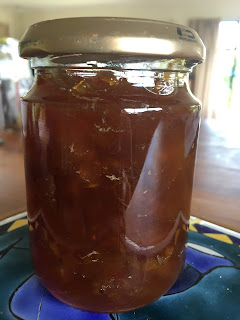