Mulberries come at a bad time in the Lower Moutere on the lifestyle block. They ripen at the end of November, just as everything is piling on in for the end of the year.
This year I was determined to be prepared.
They also don't ripen all at once so gathering enough for some jelly can take awhile. I laid out a plastic sheet under our mulberry tree and every day went and collected the ripe fruit that fell and then picked off any ripe ones hanging on the tree. 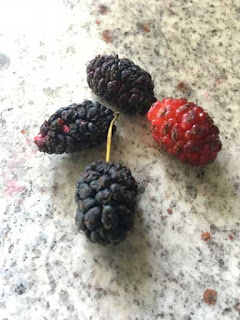 Over several days I gathered several cupfuls - enough to make a small batch of jelly.
However that busy time of year got the better of me and the fruit I had left to ripen in the basket, went too far in the heat. I had to give a 1/3 of the fruit to the chickens as it had developed mould.
Everything on the internet says mulberry jelly or jam doesn't have high pectin so won't set well unless pectin is added.
I decided to add apple as the pectin addition. I did half and half apple to mulberries.
I covered them with water and boiled them until the colour (and flavour) had been extracted from the mulberries and the apples were soft.
I then filtered the mixture through some muslin to retrieve just the red coloured liquid.
Once the fruit had let go all their juice, it was back on the stove.
Once it was boiling, I added in a 1/4 less sugar than the amount of liquid I had.
Stirred until the sugar dissolved and then boiled it until it reached 105C. 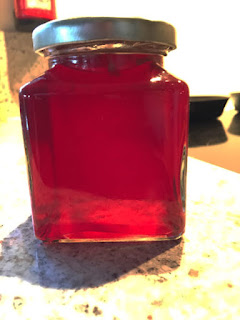 The jelly became a beautiful red colour and I poured it into sterilised jars.
The flavour is not strong and the apple complements it nicely.
My jelly could be set firmer with additional pectin but being less firm, the kids can't go through it as quickly on their toast.
This season's preserving is underway. The loquats are back next.
Posted by Fiona S at 9:57 PM No comments: