Making your own jar of olives 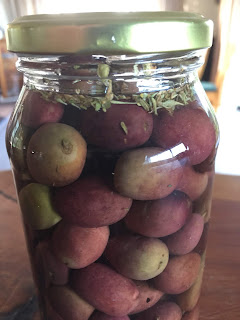 One of last things to preserve on the block are the olives.
We have four trees. I don't know what types, as they were here when we arrived. One has bigger black olives (that lost their black colour through the brining process), one has smaller green ones and another small black right through little olives.
To know when they were ready for picking. I tested them every week or so in May.

Testing for ripeness
I tested them by pushing a finger nail into the skin and checking the colour of the liquid. Once it went milky they were ripe.

I ended up picking the olives off the trees because it was easier, than shaking the tree and picking them up off the ground.
The green ones ripened earlier than the black ones.
Once inside all the articles I had read said to deal with them straight away, otherwise they would shrivel up.
So I washed them, made sure they were undamaged.
I had chosen to brine them because I had successfully done this before and it seems a good system to avoid spoilage. It is also pretty simple and just needs time and salt.
I put the washed olives into a clean jar with an air tight lid.

Brine solution for olives
I made up the brine solution of 1/4 cup of salt stirred until dissolved into a litre of water.

I filled the jars with the brine solution. The olives floats so I used a piece of cheesecloth just to keep them below the surface of the brine.
I set up calendar reminders in my phone to replace the brine after one week and then after two weeks and then once a month. Changing the brine solution means more of the bitter flavour (oleuropein) will leach out. I would empty the whole jar, give it a bit of a clean, rinse the olives and refill with more brine solution.

How long to keep brining
After three months, I tried an olive when I changed the brine solution. You give it a wash first to wash off the salty brine. Either it is okay or you spit it out super quick. Two jars were ready after four months, another is still too bitter so is currently in a new brine solution and I will test it next month.

What to do after brining
Some recipes say to leave the olives in brine and just keep changing it - rinsing the olives before use but I wanted them in the fridge so I am trialling a post recipe I found. 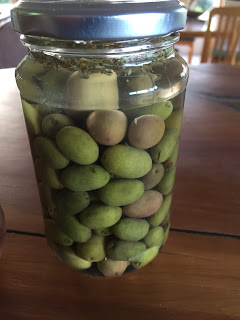 Post brining
Rinse the olives and place in a clean jar. Depending on how many jars you have done, you will need to adjust the amounts. I had two 300ml jars ready for eating so this made enough for the two jars.
1 teaspoon salt
1/4 vinegar (I used cider)
500ml water
pinch dried oregano
pinch dried thyme
Olive oil
Mix together everything but the olive oil until the salt has dissolved. Pour around the olives in the jar until it is full. Carefully pour a layer of olive oil over the top.
I am keeping mine in the fridge. After waiting all these months, I don't want to risk them spoiling. They are tasty.

What tomato is best to grow?

There are so many varieties of tomato. 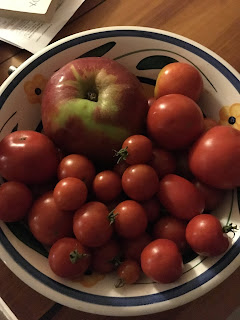 I am still experimenting with finding the tomatoes that best suit our growing conditions and what we want to use the tomatoes for - in our case primarily puree for cooking but also sauce and sandwiches. I like to give a variety more than one season to prove or disprove itself.
At the moment all my tomatoes are planted outside - not in a green house. They are all grown from seed apart from any plants we receive.

Season one I planted:

We ate them fresh.

Season two I added in:
I made relish and sauce and puree.

Season three I added in:
I made a lot of puree that was less watery and a thicker sauce.

My conclusions so far are:
I am narrowing down my preferences to:
Lastly ditch all your pizza sauce recipes and use this one: Secrets to a great tasting tomato sauce.
It is fast, easy and the taste is great - particularly if made with good flavourful tomatoes - now would that be san marzano or costoluto fiorentino, Cherokee purple or ......