Mulberry vodka was mentioned. We have a mulberry tree. It felt like something worth investigating. The recipes I found appear to be very simple - always a plus.
Find a jar, 1/4 fill it with sugar.
Add in mulberries until it is 3/4 full and then top it up with vodka.
Leave to sit for 12 months, then remove the fruit and enjoy as a fruit liqueur.
I like experimenting with fruit alcoholic drinks, the plum brandy was delicious, plus this recipe sounded easy. It was just a matter of waiting until mulberry season.
Unfortunately mulberries ripen in the busy late November, early December period and they do it by falling on the ground.
I managed to collect some ripe mulberries, that I decided was enough for two jars one Saturday afternoon. But there was no vodka in the cupboard.
Adding the sugar and mulberries, the jars sat in the fridge awaiting a shopping trip. 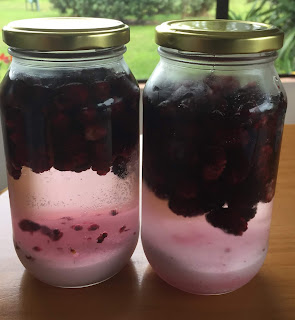 Once the necessary vodka was purchased the jars were moved to the bottom of the pantry to do the infusing thing.
One week after the addition of the vodka and the colour of the mulberries is shifting to the vodka from the fruit. The sugar is still dissolving so I will continue to give them a regular shake. 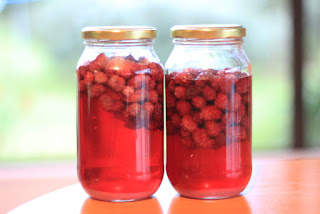 One year sounds like a long wait. I think testing will begin in about six months to check for flavour development.